Racing the for the first time in 10 years!

Racing the for the first time in 10 years!

So this might be a good spot to come for those who are looking to just get into racing the KDX. I only raced motocross for two years (from ages 16-17) and during that time did one hare scramble which I really enjoyed. Otherwise I just did trail rides.

So when I sought out buying another dirtbike I knew that I would want to get racing again.

My first race was Walton One XC put on by Offroad Ontario in Walton, Ontario on Thursday July 1.

I loaded up my rental Canyon (my truck is in the shop) on Tuesday & Wednesday morning and headed to the track after work Wednesday night. 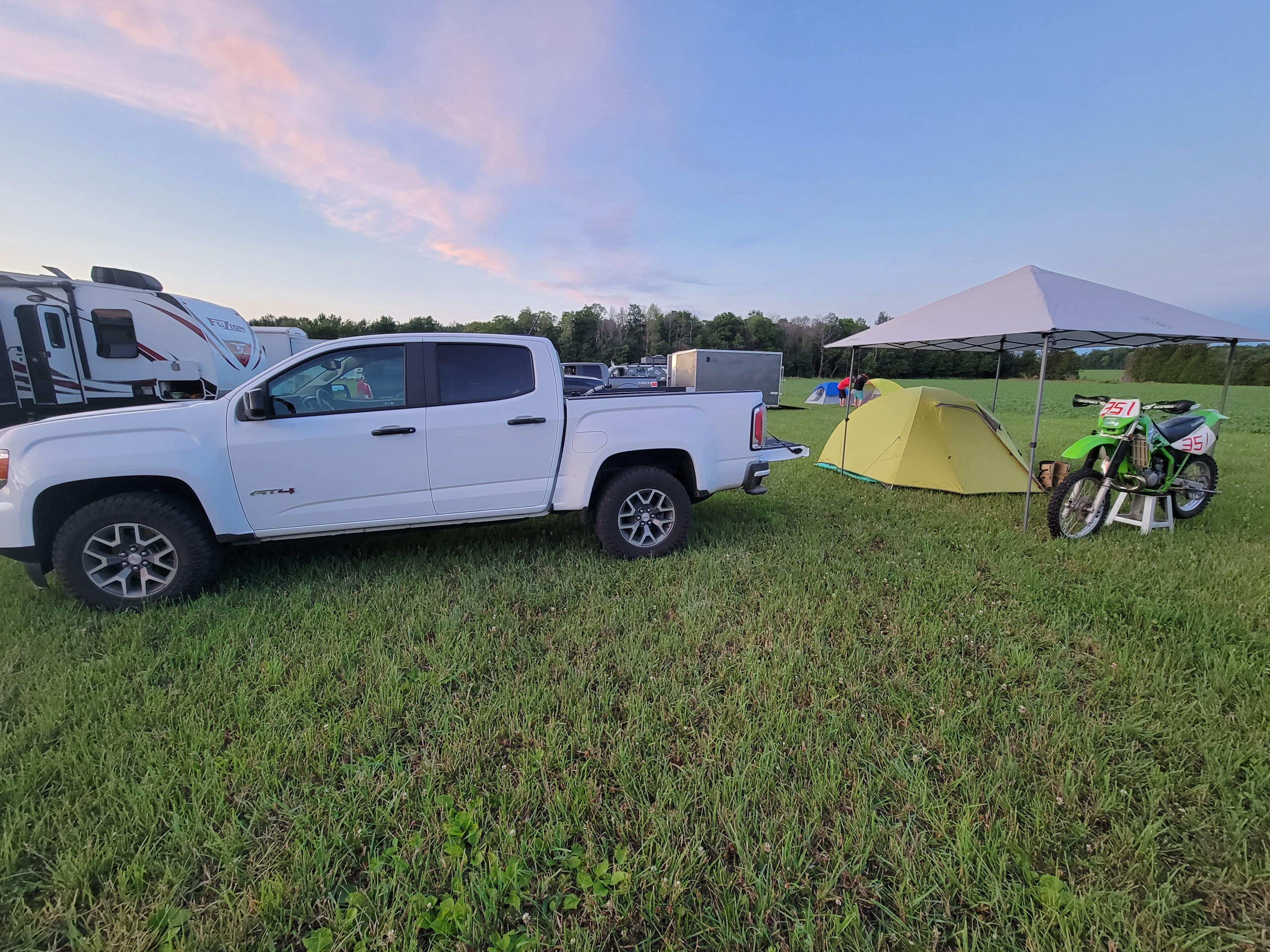 I forgot a chair, but other than a little rain it was a great couple nights tenting.


I had signed up for Intermediate B, as Novice was said to be more so for beginners. I don't know if this was the right decision or not yet. We'll see how this year goes.

I woke up early as I usually do, and decided to walk the track a little. I didn't know if this was allowed or not, so I kept to the track that was easily accessible and stayed off of the course for the most part.

As I was walking, I came across a man laying/leaning over a younger boy outside of some trailers. A number of things went through my head as I was watching, maybe the boy was getting stretches done by his dad, maybe he got into some liquor and passed out the night before, or maybe something much much worse was happening. As I walked past I made sure to make my presence known, I asked if everything was okay. The father (as I found out) called me over and said that his son had just had a seizure. The father was very scared understandably. I asked if the boy had them before and he said no, so I went to find help. There were no ambulances at the facility yet, and I later found out that they had on site medics but I had no way of getting to them at 6:30am. Am ambulance came about 40 minutes later and the boy was off to the hospital. I had discovered later that the boy (Carter) was okay, and at the hospital for some more tests. The father (Jay) was kind and grateful, he said he didn't have his phone when Carter went down and couldn't leave him.

I then stood in the registration line for two hours because they had a hard time registering all the new RFID tags. But by 9:30am I was ready to go! 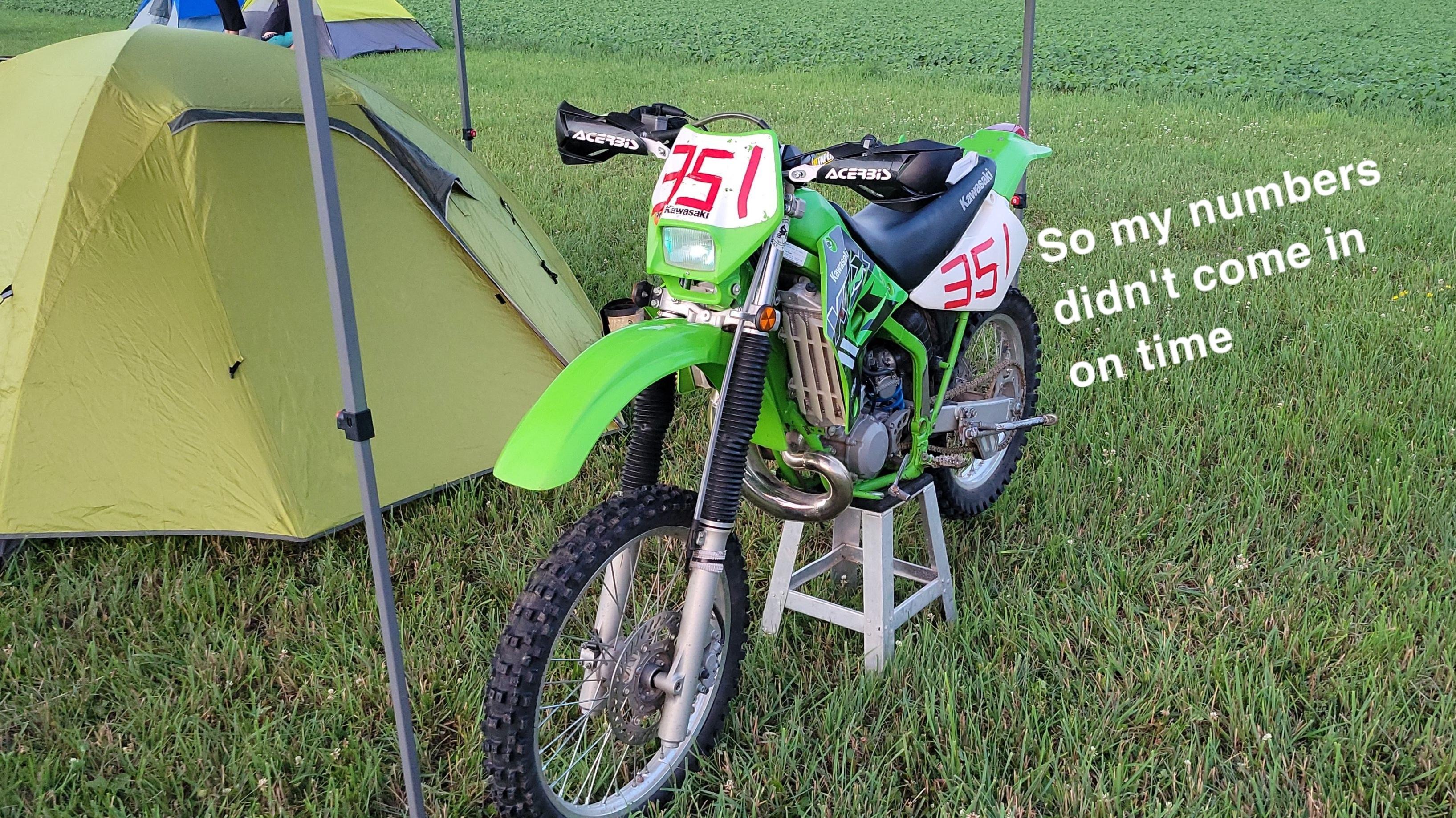 The course was very challenging and I am not in good shape. I found my hands and arms got very tired quickly, I think I'm holding on too tightly. The single track was muddy and I found myself having little confidence in my front tires grip. I also found myself always fighting to turn out of a rut, even if I wanted to stay in it. I think I need to turn with my feet more.
There was a log matrix, which I had never done before butt was relatively easy to navigate. Then there were a number of log crossings that were very very large, with no chicken line. These I struggled with the most. Lack of confidence, and strength made me anxious each time I came up to them.

I was at this event alone, so I had no one to take any pictures. And my gopro didn't record so I don't have any footage of the race. I found one photo online of a lineup waiting to cross the logs. 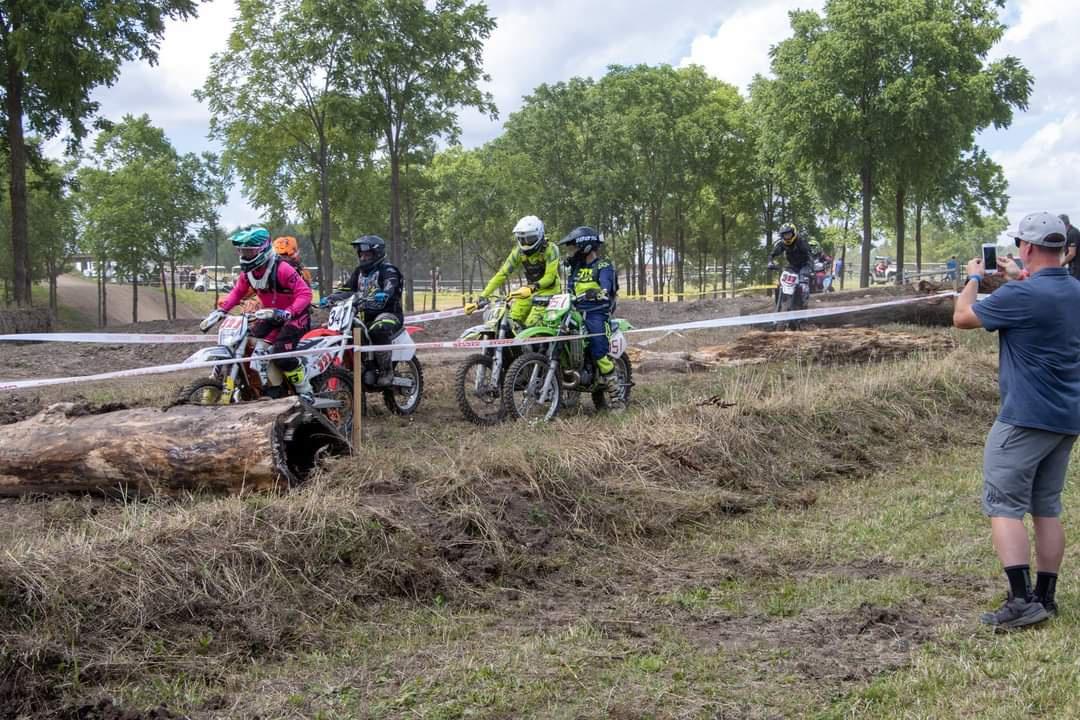 After all that, I finished 18/28. Which I'm honestly quite happy with. The course was way out of my comfort zone, and I almost quit on my second to last lap because of a bad crash. But I'm extremely happy that I finished. 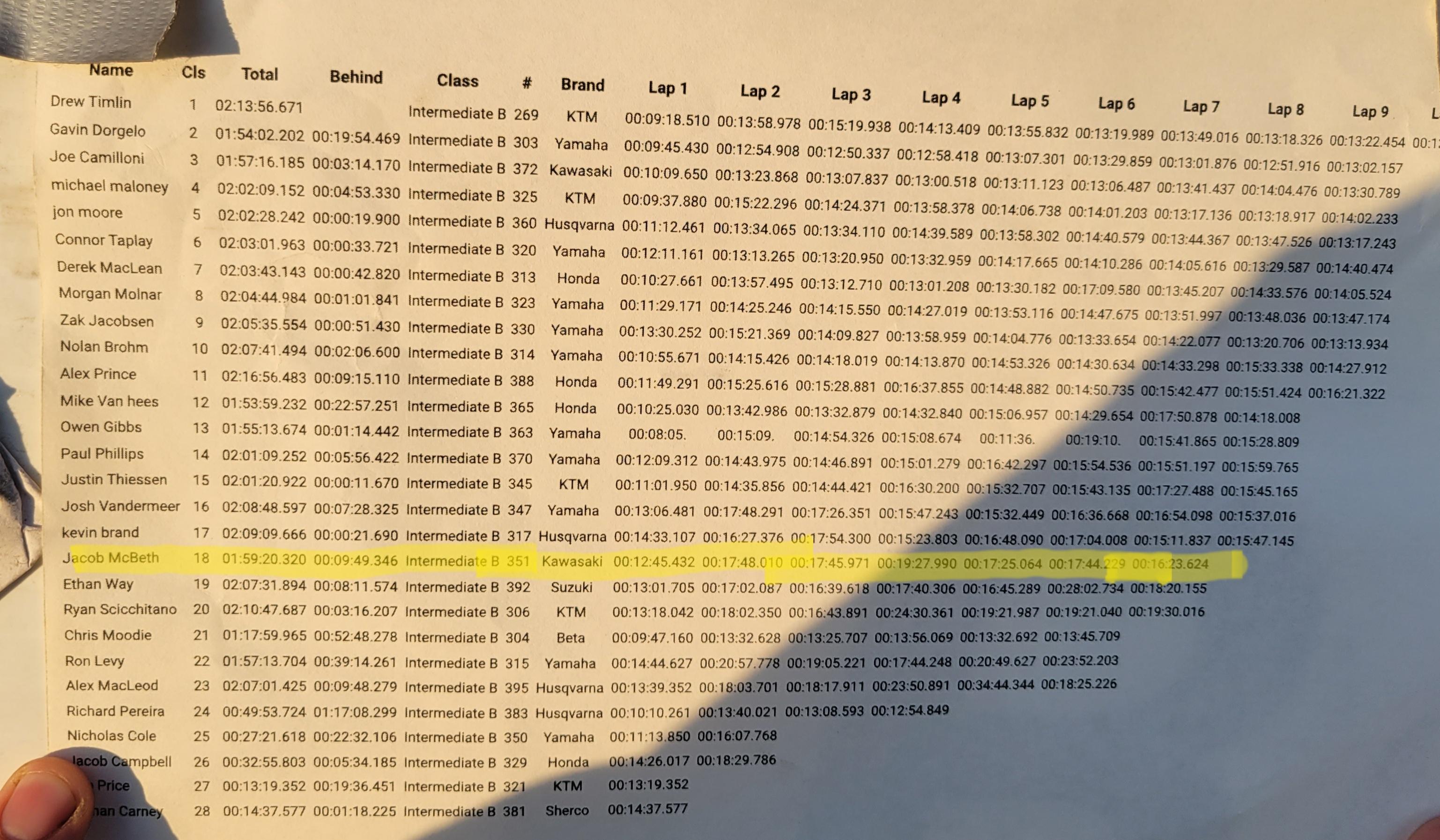 The next race is on July 24th, and I know it's going to be a sandy one!
Top

Congrats for getting back to racing and even more so for finishing! Getting a finish in a B race is no easy feat IMO/IME. However, if I were you, I would be racing C class. C class is for beginner racers not beginner riders. C is where you learn the ropes and get up to speed. If you start finishing top 3 in your division (C30, C50, etc) on a regular basis then it will be time to step up to B.

WOW! Great job! Congratulations on helping out with the young guy, besides the race results. Getting out there is tough.

Do check to see if there is a "C" class however.
Thank you for participating on kdxrider.net.

SS109 wrote: ↑04:10 pm Jul 12 2021 Congrats for getting back to racing and even more so for finishing! Getting a finish in a B race is no easy feat IMO/IME. However, if I were you, I would be racing C class. C class is for beginner racers not beginner riders. C is where you learn the ropes and get up to speed. If you start finishing top 3 in your division (C30, C50, etc) on a regular basis then it will be time to step up to B.

Thanks for the feedback. The only lower class that is available for me would be Novice. And I did consider this, and I will continue to consider changing classes as I continue racing. After my next race on the 24th I should know with some more certainty whether or not to drop classes.

I should note that Novice is known to have a significant amount of sandbaggers in it, (so I was told) & at this race in particular the Novice winner had a competitive time with the Expert class winner. (Novices was actually 3 minutes faster per lap, but they ran a slightly modified loop). I was told by a sweeper that the morning course was the same time as the afternoon course, just avoided some of the harder obstacles. There were also 15 more entries in the Novice class than the Intermediate B class. To me it actually seems safer to ride the class I'm in. I know how to race and to avoid the higher classes when needed, so I'm not a liability out there. I honestly believe that if just my fitness was a little better that I would have done significantly better.
Top

Smart, stick with B then (C is Novice class). I know that's what I did when I first started racing. I skipped C and went straight to B to avoid the Carnage class as I like to call it. Sadly, there are sandbaggers in every class except Pro! Keep at it and get after it!

Return to “Racing the KDX”