Yesterday was a good day..

Started off with my oldest helping get a feebay exhaust pipe ready for paint.
It was either packed with shredded newspaper, or a mouse got in there or...?

Stuff kept coming and coming when we blew it out. 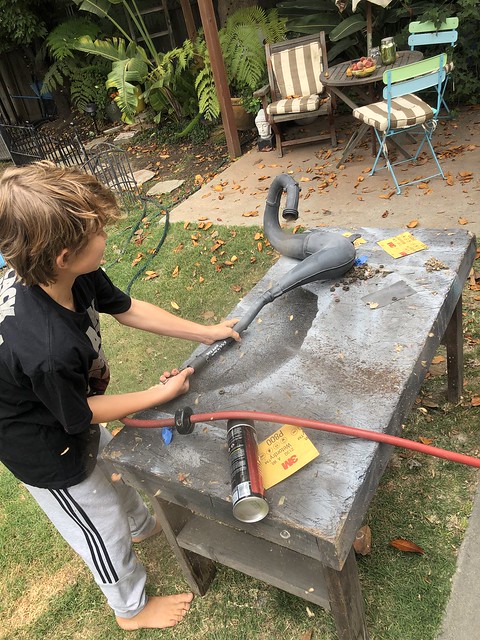 Pretty soon our friends came over and helped sand the old crusty paint off. 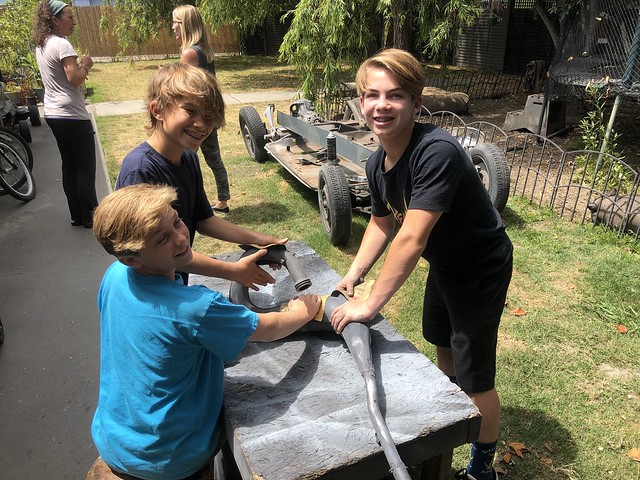 We also re-packed the muffler and gave it a polish, even
(it was so battered and scratched it didn't look like much). 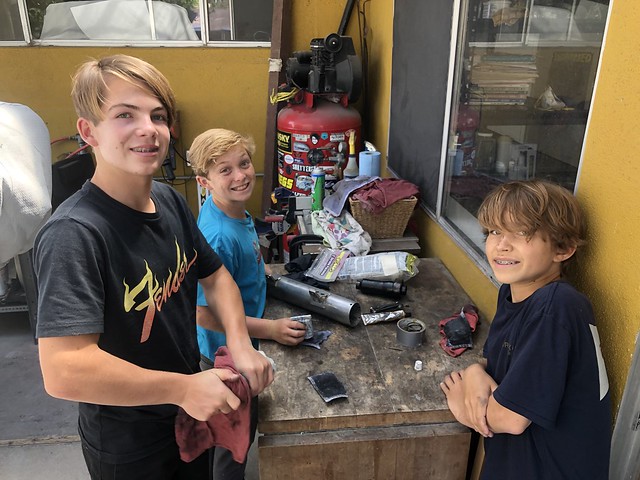 I got on with putting a motor together.
Rather than blueprint the thing, check port alignment with the piston, deck height, etc.
I just stuck the sucker together. 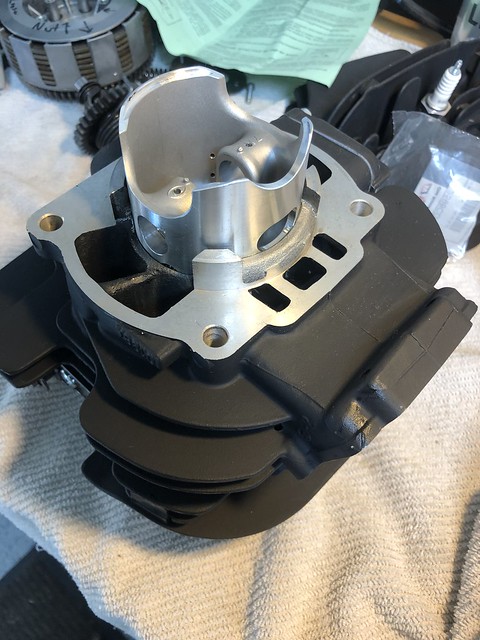 It's really hard for me to install any gasket dry.
Was out of indian Head shellac, so I put some Aviation on the base gasket. 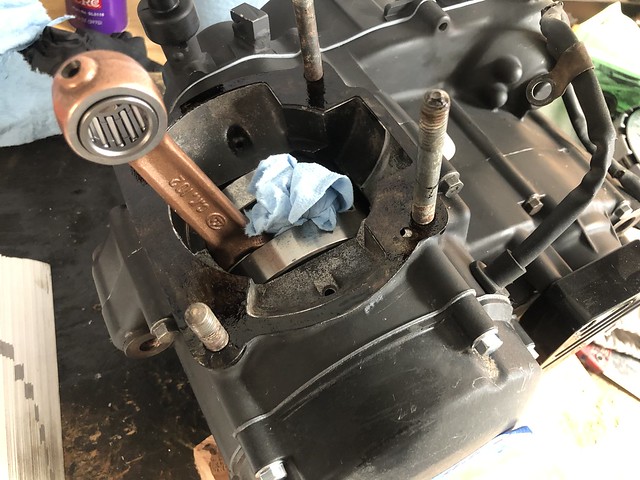 For the head gasket, I used aluminum paint;
This is an old-timer trick I just can't help doing on any semi-metallic head gasket.
I just had to..

Here's the parts for the reed valve area.
The manual doesn't show a gasket between the cage and the boot thingie,
So I put some aviation on where it woulda gone, unlike in the pic here. 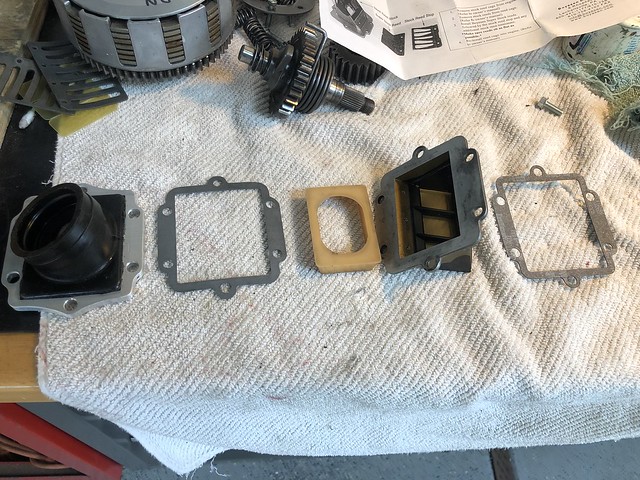 Was going to put these Boysen reeds on, but they just seemed so different than the ones in place.
Took and flipped the ones on it over, but that made them worse, so put them back. 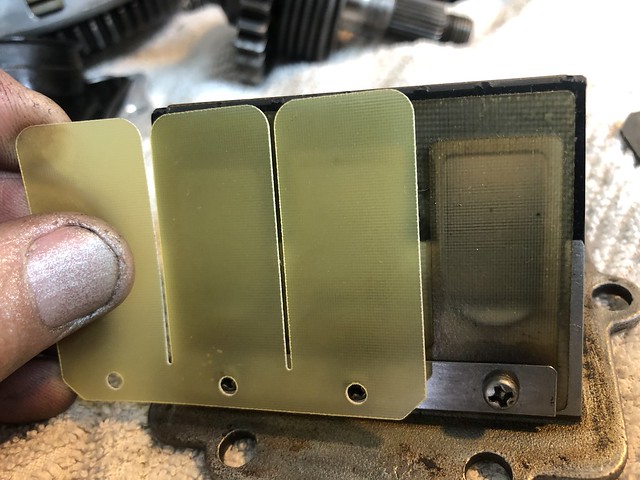 People are still happy to trade money for parts that don't work.
it's always about getting the money, right? 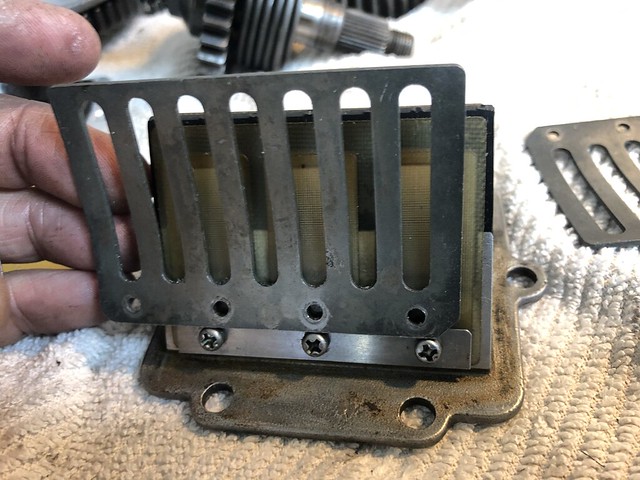 Since the bike always ran FINE with the reeds just like they were,
It went back together just like it was.
[ 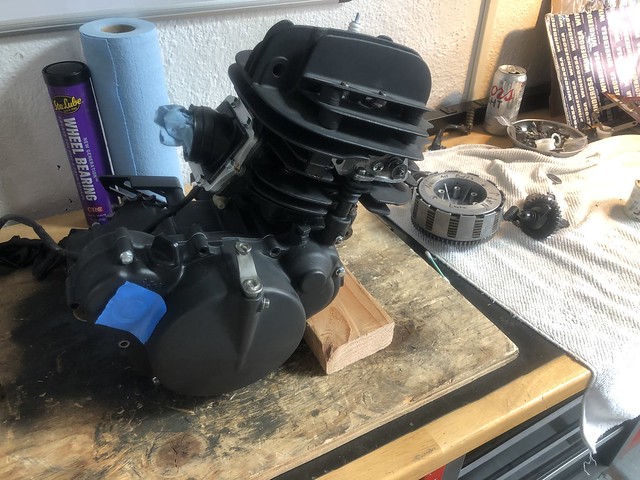 About the blue tape on the pictre above..
Apparently, the last guy who worked on this really didn't believe in washers.
Must have been against his religion or something..

Certain washers, like under the throw-out pushrod, under the rotor bolt, those are specialized,
And obviously have to go in.

But here's an odd one;
Washers on each side of the plastic spacer inside the kicker return spring..
Manual shows them: 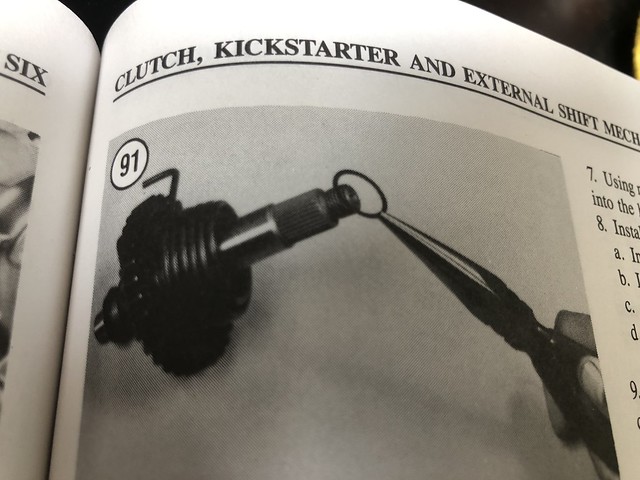 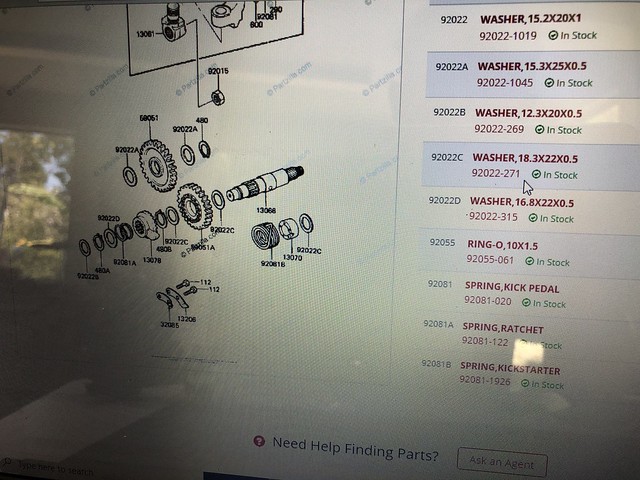 Yet, ALL THREE of the motors i took apart had NO shims on either side of the plastic spacer.
Neither did two extra kicker assemblies i ended up with.. 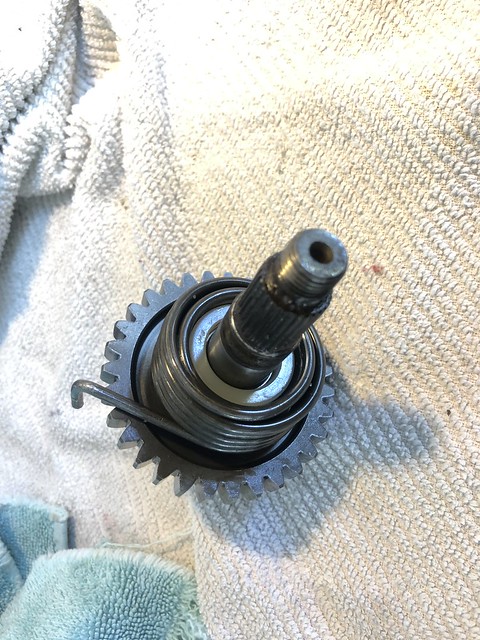 Anybody know the truth on this one?
Here I'm all going fishing for some shims, and do the whole end-play/shim/check routine,
But maybe they were eliminated later on?

It obviously starts the bike without them,
But who wants a sloppy/slipping kicker that eats ratchet gears??

THIS is why you never rebuild a basket case.
ALWAYS start with the best example you possibly can! 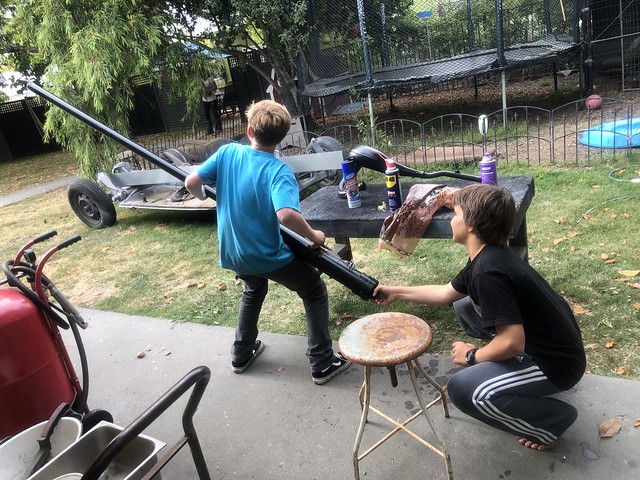 I have an 84 motor AND an extra kicker assembly and neither has those washers either. Good to know I’m not alone.

I also don’t have reed stops, and I’ve worried that one might flex too much and break, but I’ve been fine so far.

That rod is from Hot Rods.

It was installed on a crank done up by Off-Road Innovation.

Good job on the continued work! I can't see "no washers" as being a good thing. On some Boyesen, they come with different reed stops and one does not use stock.
Thank you for participating on kdxrider.net.

After sitting disgruntled over missing trivialities,
I finally realized that I have most everything here now..

What was all of this stuff, again..? 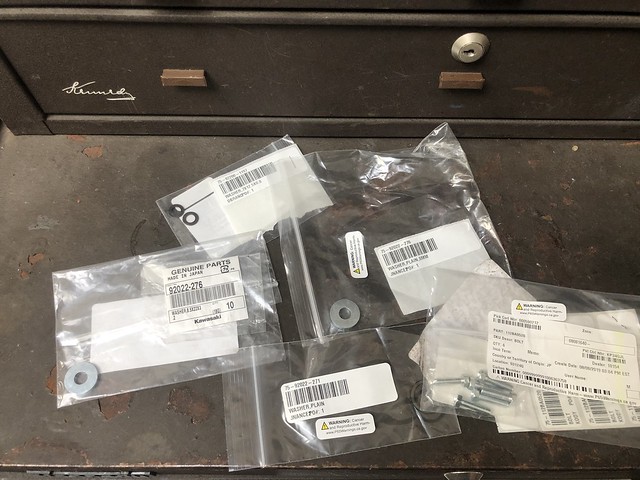 One thing that was really giving me the hump was a pool of oil underneath each "rebuilt" fork leg.. 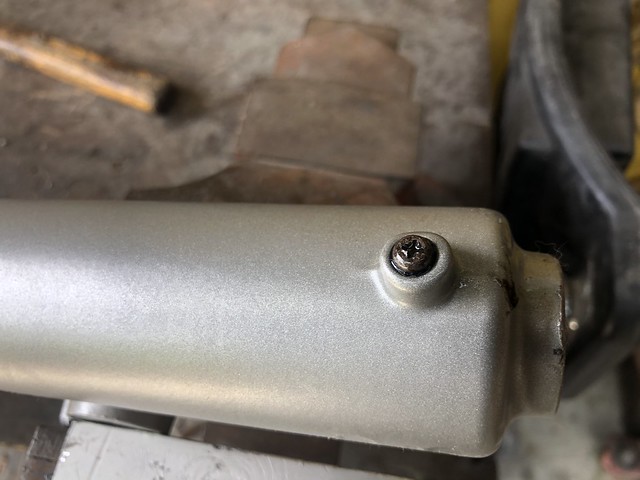 Man, I hate re-work.
You would think a rebuild kit would include seals..
What you don't do correctly, you can do again! 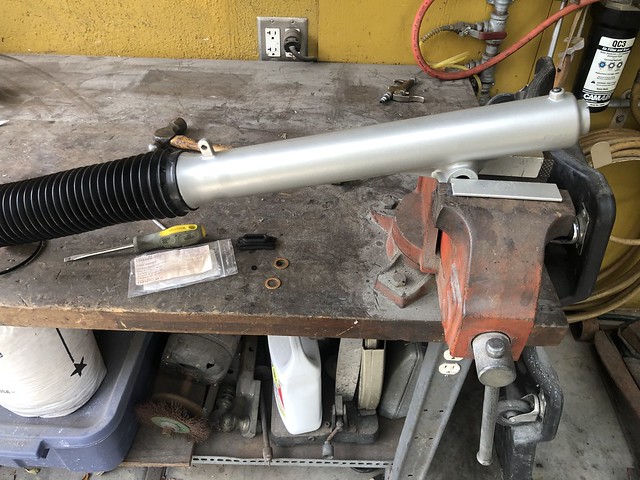 Somehow, somewhere, someone has come up with a way to NOT make a mess doing this job.. 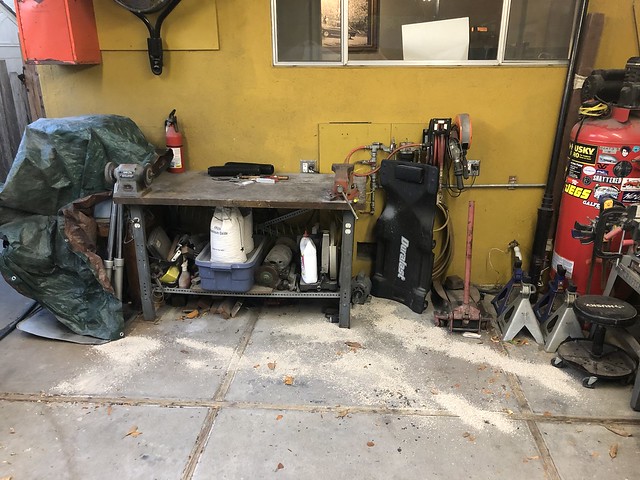 Broke this doohickey trying to hold it during tightening;
Spare core motor saves the day! 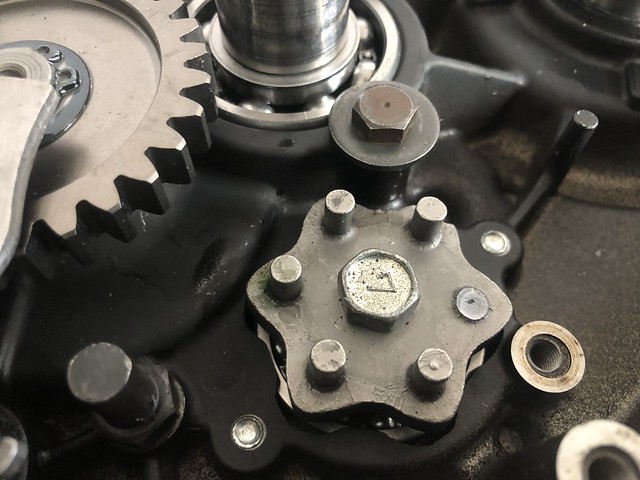 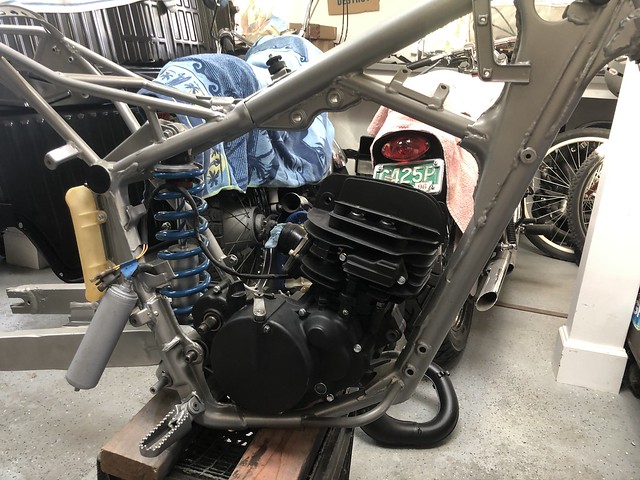 That led to digging out parts and cleaning/fitting/fettling..
Been wanting to install these little gems for a loonng time. 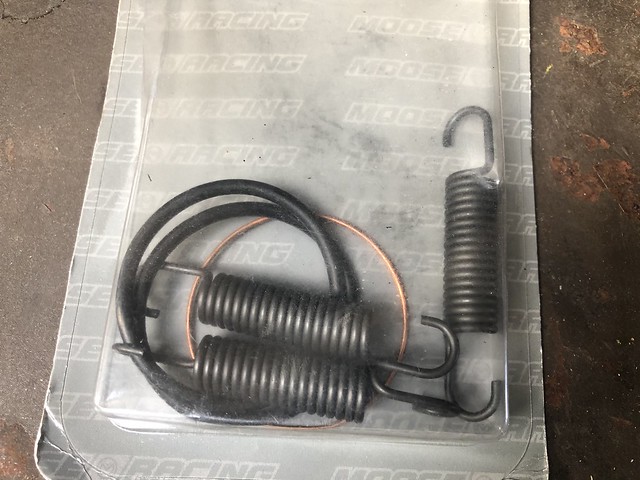 After almost ten hours, it actually starts to look like a KDX.. 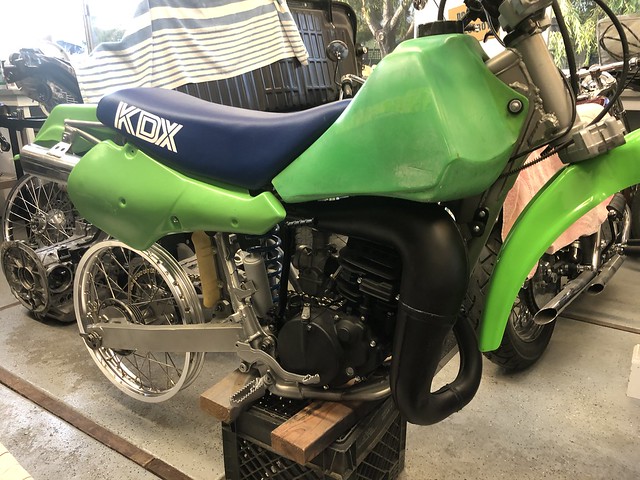 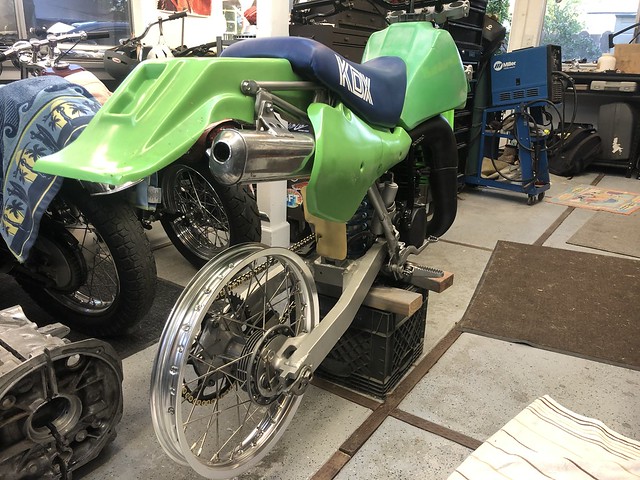 Late at night,
Stuff just set in place for now,
And to figure out what's gone missing over the years..

The list isn't too bad,
So one or two more sessions should get us there.. 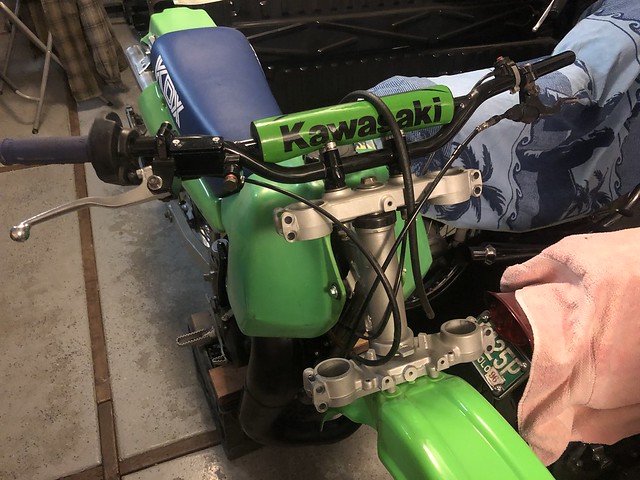 LOOKING GOOD! Congratulation on getting back at it.
Thank you for participating on kdxrider.net.

Great thread, thanks for documenting this considerable project! I have a 1988 that I'm trying to get fixed up and running. Paid $450 for it and felt kind of stupid once I started noticing all the broken parts that I should have seen before handing over my money. Broken right side engine case, missing spacer on front axle, tons of play in every rear suspension joint, etc. I have to say though, yours looks like it was an even worse starting point (although to be fair I've never heard mine run yet lol). Kudos for persevering!

Two tips for you based on what I've discovered so far working on mine:
Let me know if you get stuck on any small detail questions and I can look at my bike for reference to hopefully help you out.
Top

I have never heard that on a sprocket. Thanks for the heads up.
Thank you for participating on kdxrider.net.

Great, now I gotta check my splines and sprocket. Thanks for the heads up
I like turtles
Top

Spent a couple of days after work..

Put some stickers on;
Couldn't for the life of me get that big plate to lay down without wrinkles!!

We'll just have to put some numbers on to cover them up.
How old was Jason, again?? 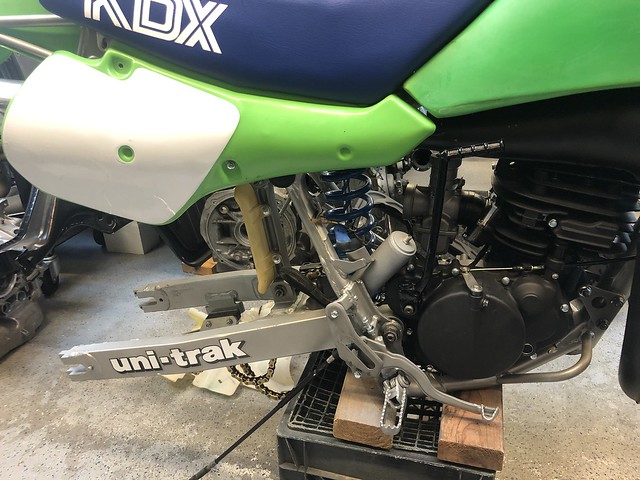 Could NOT for the life of me, find this bolt anywhere..
This goes thru the lower shock mount eye and the two plates that attach to the frame.
Kawasaki Part# 130P1260 It's not here anywhere,
or anywhere on the Internet or anywhere else...

) Non-flanged, with coarser threads, at my local Ace Hardware. 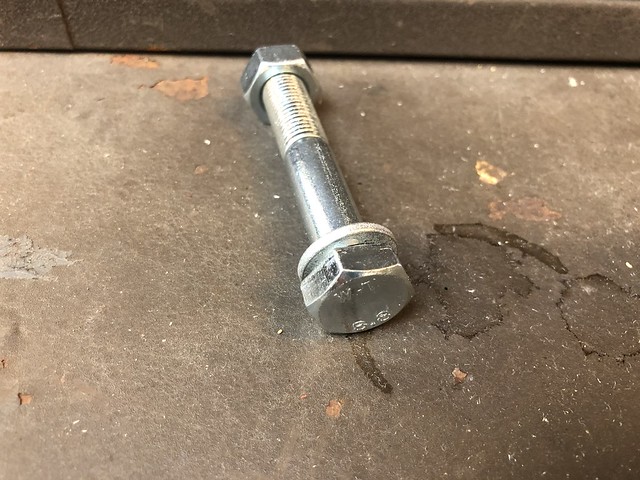 Maybe one of you guys out there has a dead bike I can steal a bolt/nut off of?

Thanks folks, I'll be here all week.. Don't forget to tip your waitress...


There were little cracks all over the intake boot if you bent it over.
The rednecks had smeared some roof mastic, or that A/C duct sealer, on to help..
Because it was the wrong color, and needed more, this redneck added some vinyl coating
(Always do your hack work in the correct color). 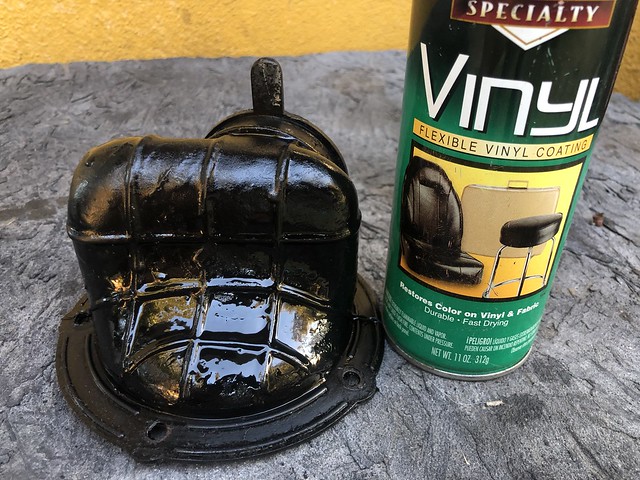 The list of little things to:
Scrape off,
Clean in gas with a toothbrush,
Wire-wheel,
Glass-bead,
Cad-plate,
And install,
Has gotten pretty small.. 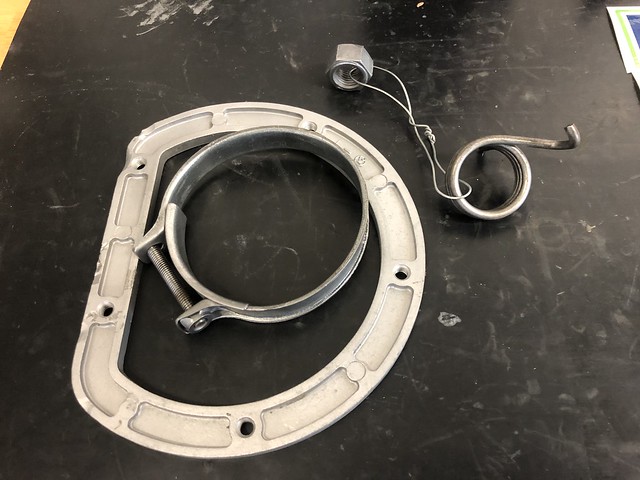 looks about the same to me

Be sure to tighten it to the proper torque. The shock will come loose, then you will jump a small double jump and bend the shock rod. Or at least I did many years ago.

Thank you for participating on kdxrider.net.

I don't have a spare of that particular bolt, but I can check the one on my bike to see what grade it is. I might even have a bolt of the same size in my stash, I can check.

Nice job on the air boot reseal, I need to do the same thing to mine.
Top

My lower shock mount was held in with a smaller bolt, but and washer when I got it.

I sent a reply to your PM but it is stuck in my outbox...tried again and same thing.
Either I don't know how to send a PM or you can't receive them?

I still have a spare lighting coil.
I dug it out of the crate and its not in as good shape as i remember it though.
Not really looking to get anything for it so I can ship it to you, let me know your address.
Its a lot of work documenting a rebuild and I've enjoyed seeing your progress and updates.
Are you still interested in a slotted baseplate too?
Top

I took a look at the lower shock mounting bolt. It has a weird "q" symbol on it that is probably a manufacturer's mark. No hardness rating unfortunately. It measures 56mm long. I didn't pull it out to measure the diameter, but assuming it is a fine thread M12 like kdxsully said, I think you need a JIS flange head M12x1.25x55 grade 10.9, like this one I found with a quick google search:

Actually, let me doublecheck the length on that, I may have written it down wrong
Top

Thanks for the help with the bolts, guys,
Very much appreciated.
Turns out Wal-Mart had my 10.9 bolt and nut. 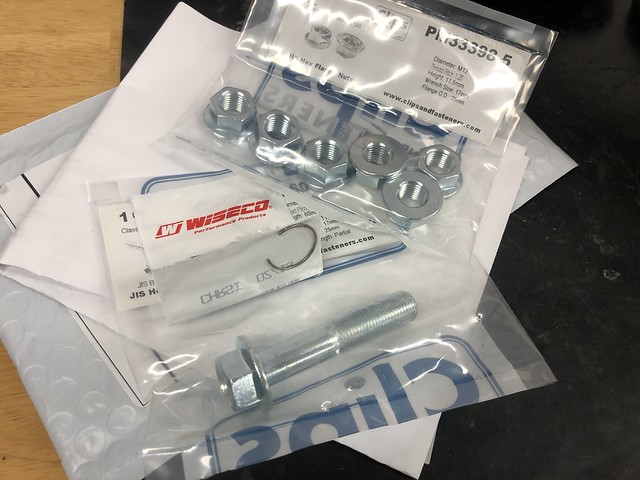 See also something Wiseco was cool enough to just send me.
Not that I want to,
but,
I put a circlip in -just- a bit wrong.
Couldn't sleep with that, having a new cylinder and all.
So,
Yes,
The top end will have to come back apart.

No big deal at this stage I guess..

Got the tires/tubes/strips and a check of my lace/true job at a local shop.
Decided to go with the dual-sport tires since we're going to at least try for a plate somehow one day.
Even if they do look kind of sissy..

Had to just mock everything up, and stare at it, even though there's still PLENTY to do.. 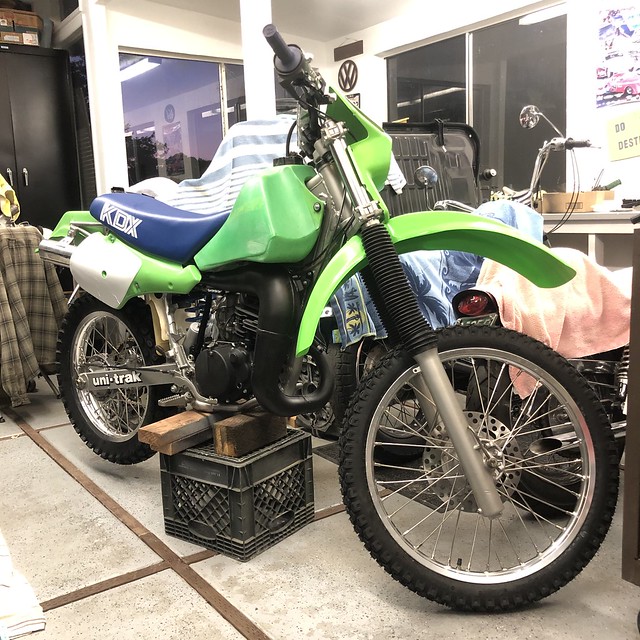 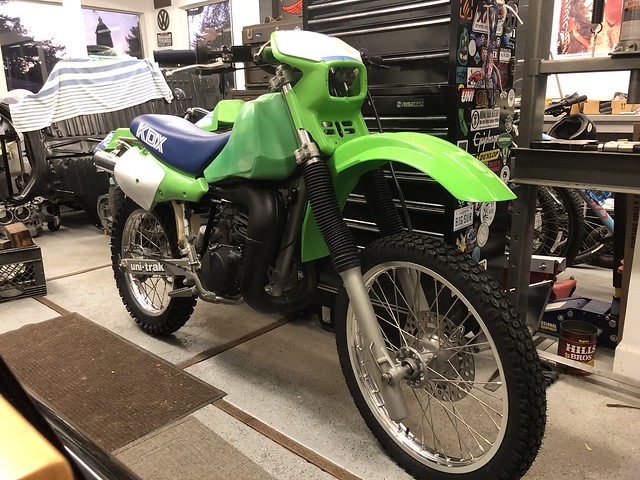 Also, good job on having enough light to see. Good lighting helps so much!
Thank you for participating on kdxrider.net.

Wow! By the time I would be done with this I’d think twice about even riding it.
I like turtles
Top
Post Reply
93 posts