I've never exactly been the kind of person to let things be as they were. As time goes on and technology advances, I want some of the new with the nostalgia of the old. The General Lee, but getting 40MPG. A 1940's Willy's, but with working suspension.

So naturally, I looked at the 'dated' technology of our beloved KDX's and looked at remedying it. I'm not the first, and I'm sure I won't be the last to have the same thoughts and opinions.

) it was missing a lot more than I thought, but I drove three hours for it so I just cut my loses and took it. 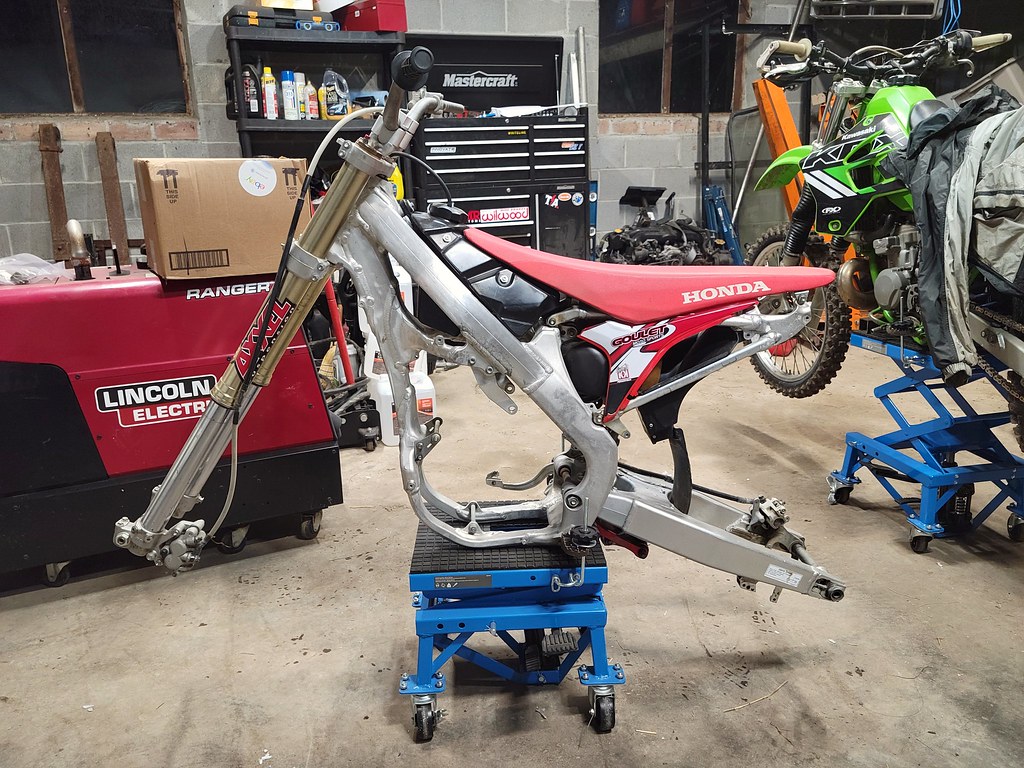 I bought some Acerbis plastics for it so I had some motivation to work on it. 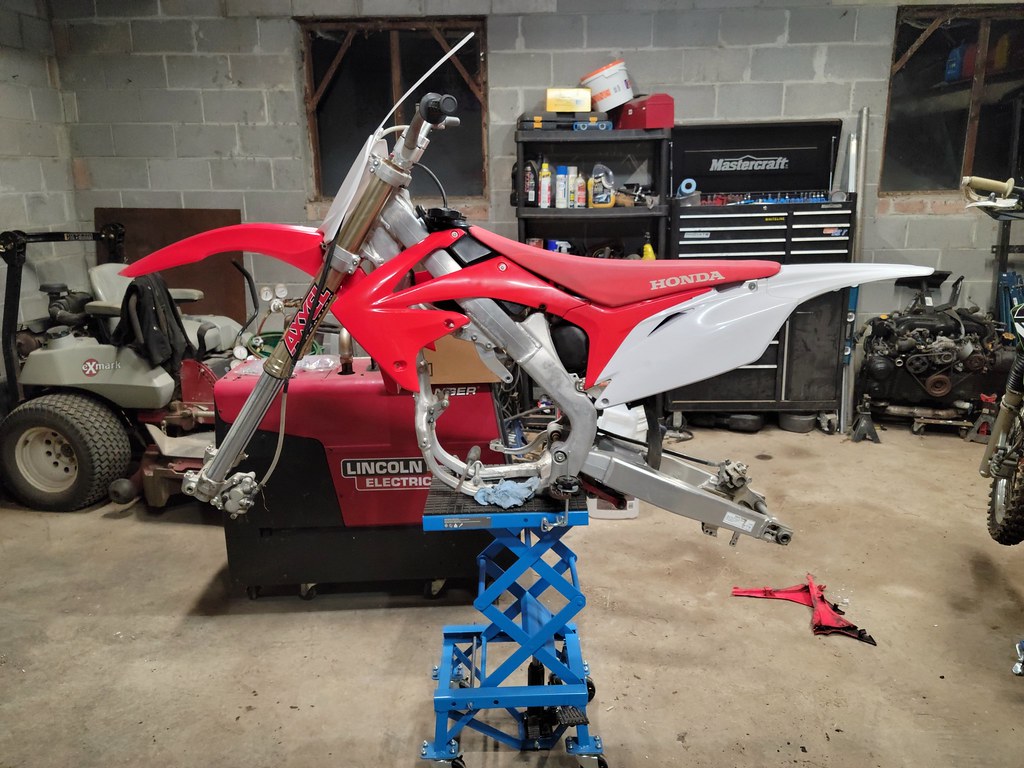 Then just yesterday I decided that I was going to try and tackle the build before the riding season really kicks off. I'm hoping to have the project done by mid May/June but we'll see what kind of wrenches get thrown in the way.


I tore the engine out of the KDX and placed it in the CRF's frame to see what kind of work I was looking at. 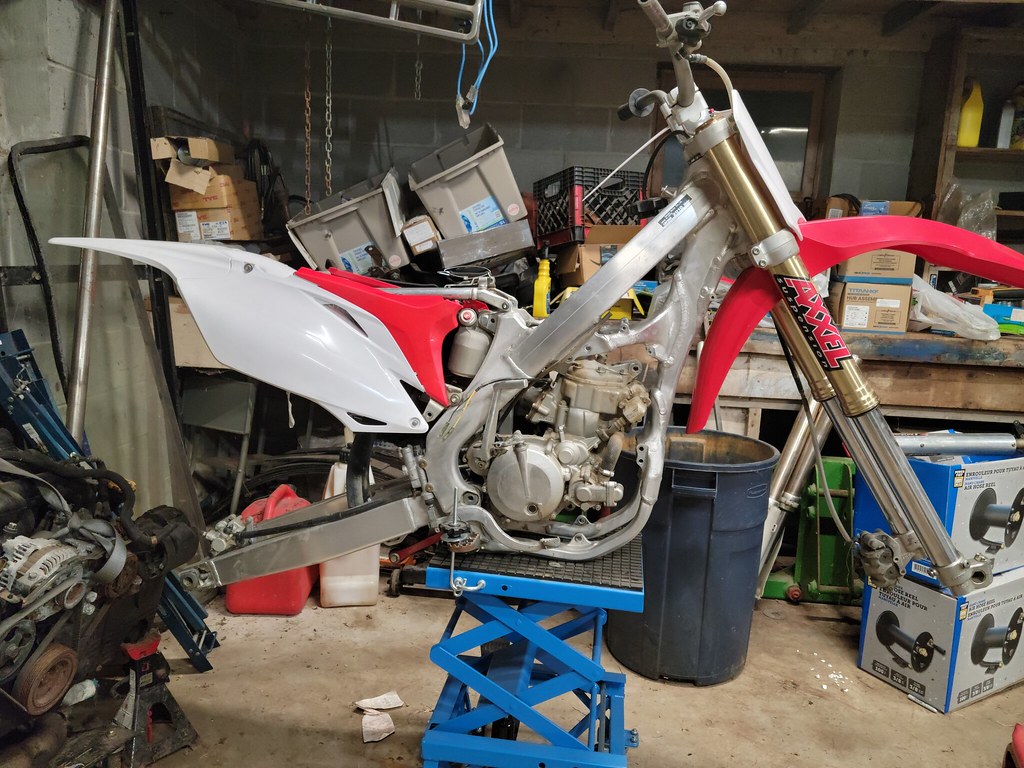 Obviously the "Y" of the frame will have to be cut and moved up in order to fit the exhaust, then all of the accompanying engine & exhaust mounts. 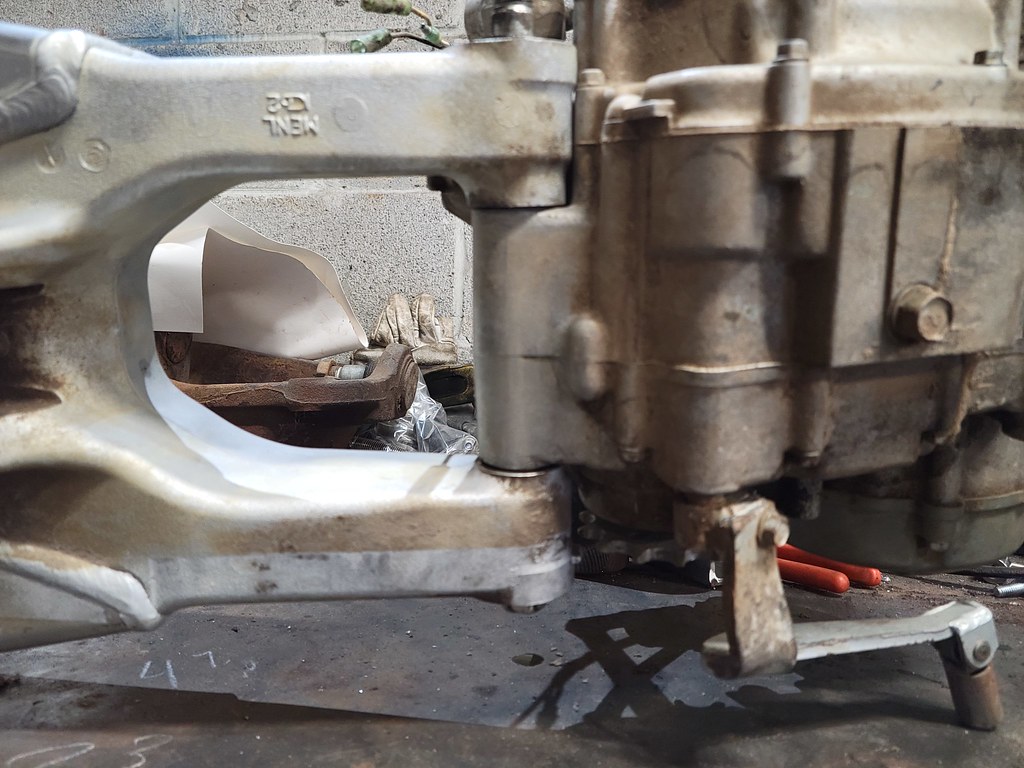 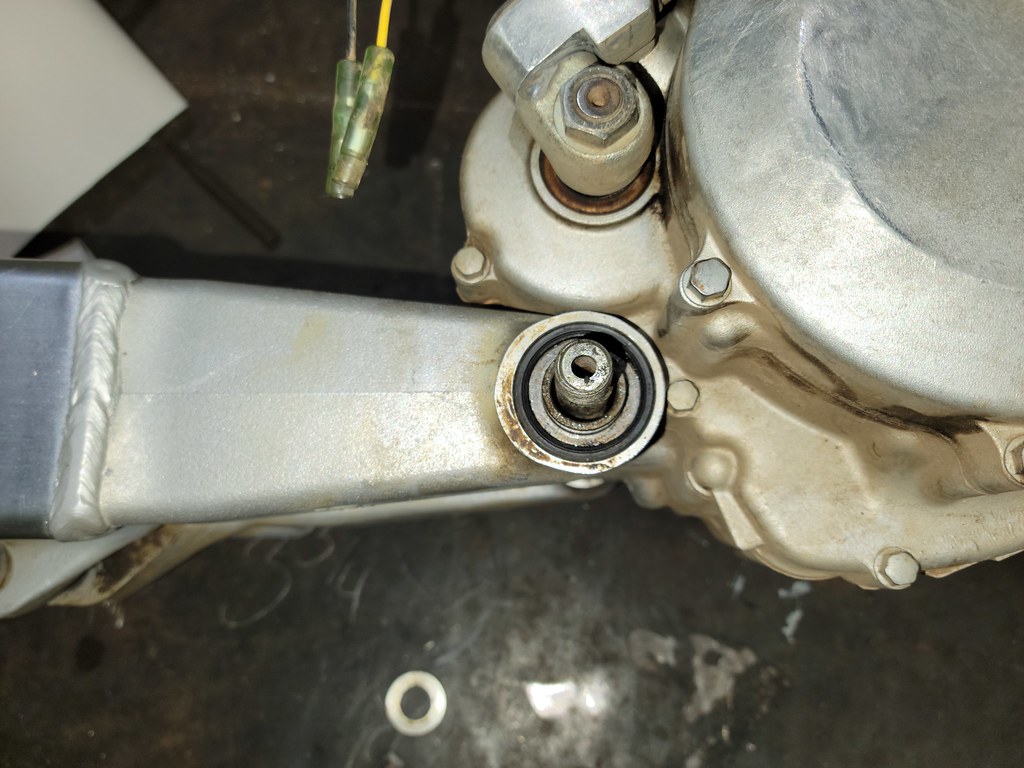 Bottom view, unmodified engine and swingarm. Almost perfect fitment width wise. The shaft and case clearance will be where I will have the issues. 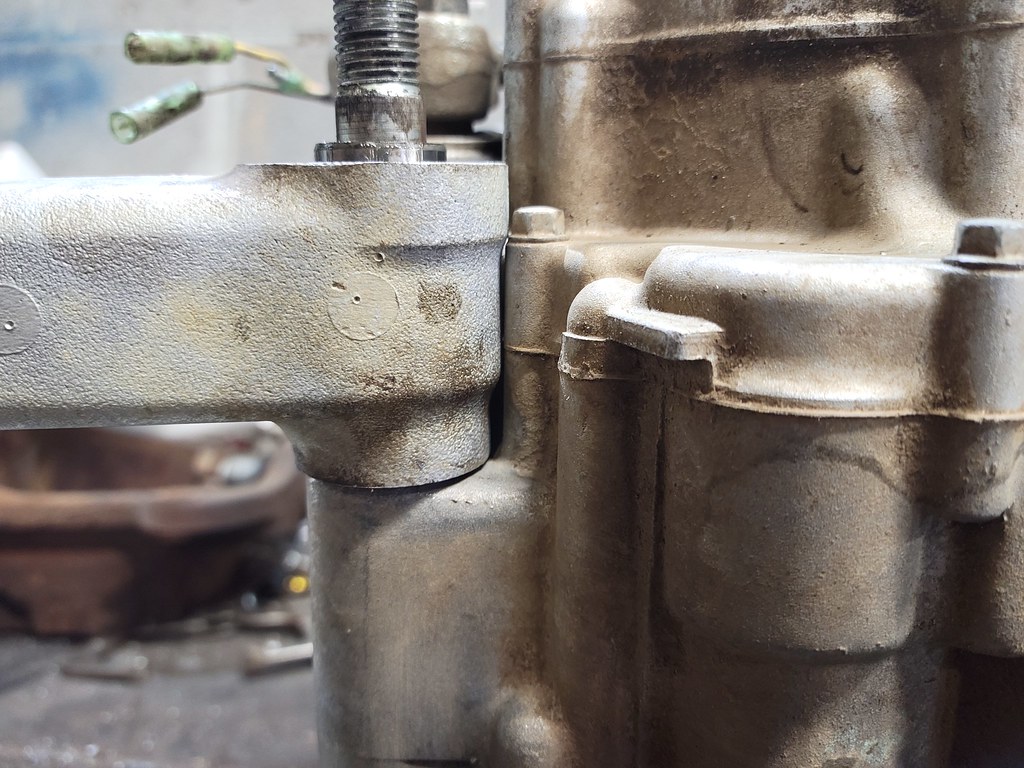 It does look that I will have to provide some clearance on either the engine or the swing arm, as they are incredibly close (but surprisingly not binding). I think that I will shave a VERY small amount off of both the engine case, as well as the swing arm. I'm hoping that something around 1/16" will be enough clearance. I don't know if I can get away with a whole lot more than that.

I am still waiting on some parts, especially wheels. Those will be the big things keeping this project from moving forward.
Top

Once you solve the swingarm to engine fitment and verify the countershaft/swingarm alignment, the next big hurdle will be the cradle and then pipe fitment. I love my hybrid, good luck on yours!

Very nice, looks like you are well underway. Always appreciate the AF ones as welding aluminum isn't in my skillset. Another fun one is the airbox/boot/carb alignment, will be interested to see how that works out for ya with the Honda airbox. Good luck with the progress!
04/05 KX220 Hybrid all decked out
18 KTM 500 EXC-F Sumo toy
Top

bufftester wrote: ↑05:12 pm Apr 06 2022 Once you solve the swingarm to engine fitment and verify the countershaft/swingarm alignment, the next big hurdle will be the cradle and then pipe fitment. I love my hybrid, good luck on yours!

I'm having a real hard time finding an affordable rear wheel so I can properly line up the sprockets. Without the wheel I'm not going to be able to accomplish much more.


Tyl3r wrote: ↑09:03 pm Apr 06 2022 Very nice, looks like you are well underway. Always appreciate the AF ones as welding aluminum isn't in my skillset. Another fun one is the airbox/boot/carb alignment, will be interested to see how that works out for ya with the Honda airbox. Good luck with the progress!

I've done a handful of aluminum repair jobs, and have decent TIG skills, so I'm hoping I can get through it without many hiccups.
I'm also curious about how the carb will line up. We'll see how creative I'll have to get to make it work.

I'm still under 30 so I certainly hope this doesn't add to my collection of greys!
Top 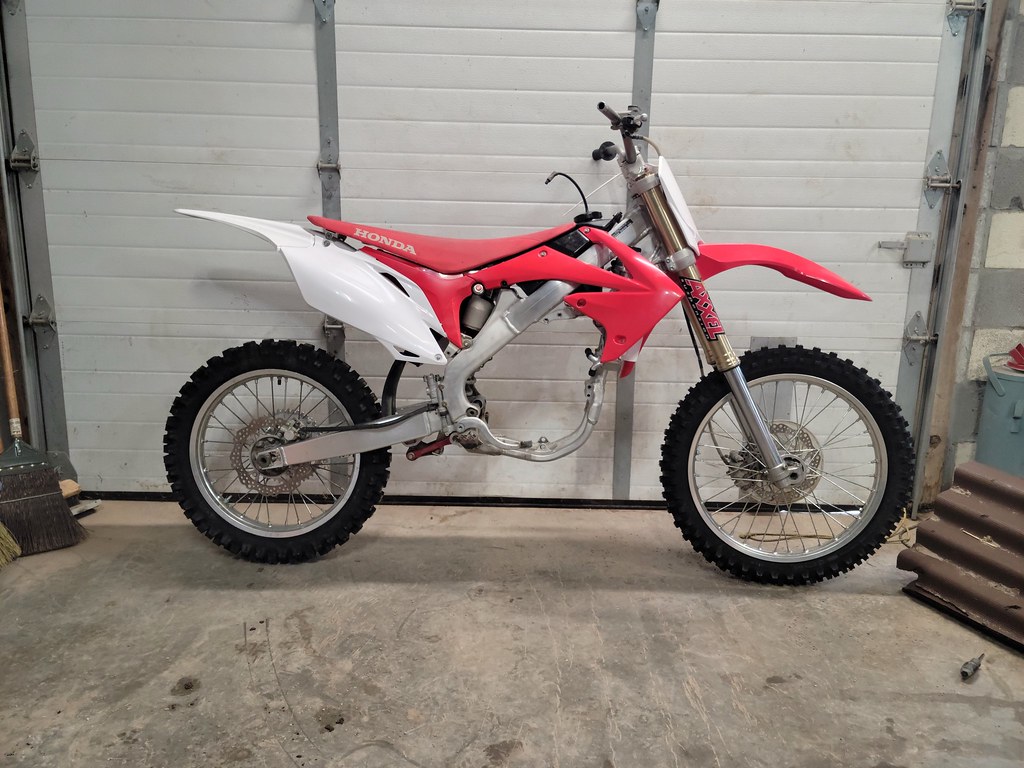 I managed to get some things in order to make the CRF look a bit more like a dirtbike again. And it looks like the sprockets will line up very well. 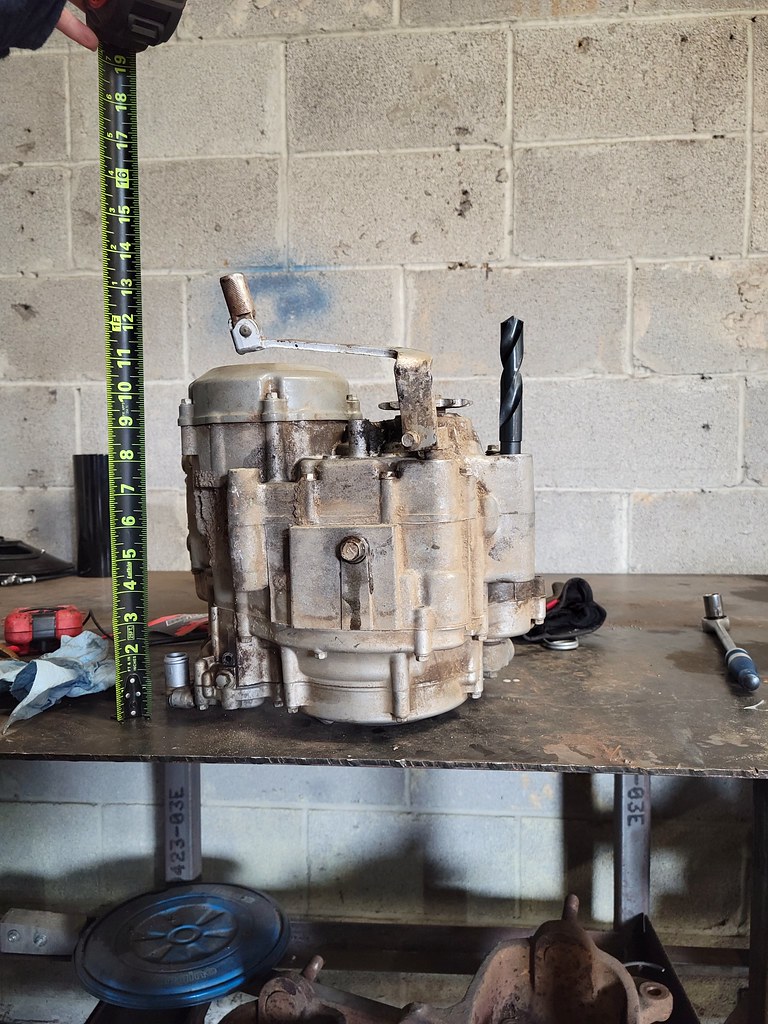 I have to drill the engine out in order to fit the swing arm shaft. I purchased a 17mm drill bit and am hoping to get it drilled this week. The photo here is to send to my coworker to make sure that it would fit in our mill at work. This is my scariest moment, because if this doesn't go well the cases are done for.
Last edited by mcbeth.059 on 04:55 pm May 04 2022, edited 1 time in total.
Top

Those would help wouldn't they? I can never seem to get them to work from my phone. I'll fix it when I'm home tonight.

Thanks for letting me know
Top

I think most people have used a reamer, not a drill bit on the cases.
Thank you for participating on kdxrider.net.

A reamer would be ideal, but the difference in size means that drilling is my most affordable option. Machining tools start getting real expensive. I'm looking to get the engine drilled out on Friday if we get enough work done in the shop.
Top

I used a 17mm drill bit and a hand drill when I did mine. Take your time and go slow, you can also work up on drill sizes if you want, but not really necessay. The center part of the case is a void, so you really just need to make sure you stay plumb from one side ot the other